Home Destinations Palaces in Venice: a reflection of the rich past of La Serenissima
DestinationsEurope

Palaces in Venice: a reflection of the rich past of La Serenissima

Romantic Venice is a real city of palaces. And while many of the opulent residence are still privately owned, the cost of maintaining them in the city’s hostile environment has forced many families to sell their ancestral homes over the past two centuries, donate them to the city, or set up foundations to preserve the unique buildings as cultural heritage. We have chosen the most beautiful palaces in Venice, which will most eloquently tell about the life of the once rich and influential families of the Republic.

A magnificent example of Venetian Baroque, this palazzo once belonged to the Pesaro family and was designed by the architect Baldassarre Longhena. The façade is an imposing chiaroscuro of statues and bas-reliefs, while the interior is superbly decorated by Giovanni Battista Pittoni. It also houses the International Gallery of Modern Art.

Another museum (1700s) and another palace not to be missed. Its internal structure and the series of columns that lead directly to the waters of the Grand Canal, are striking. In the interiors of the palace, rich in works of art, you can see what the luxurious life of the noble Venetian families was like, and from the upper floors there is a breathtaking view of the rooftops of the city’s houses.

The Ca’ d’Oro Palace must have been magnificent when completed in the 15th century. Triumphant polychrome marble and gold leaf decorations gave it the name – the Golden House. This gem would have been lost to posterity if the patron Giorgio Franchetti had not saved it from destruction.

The seven Venetian doges came from the powerful Mocenigo clan, which helped to rule the city from 1414 to 1778. The family’s Gothic-style palazzo on the Grand Canal was bequeathed to the city by a last descendant of the family, Alvise Nicolò Mocenigo. Here you will see beautifully furnished rooms, furniture from the 1700s and 1800s, family portraits and a rare chandelier by Giuseppe Briati, one of the most famous Venetian glassmakers. Five rooms of the palazzo are dedicated to the role of Venice in the development of perfumery.

The Doge’s Palace and the Bridge of Sighs are some of Venice’s most iconic landmarks. Former residence of the Doges and the government of the Republic, this palace is a true symbol of the city and a masterpiece of Gothic architecture. 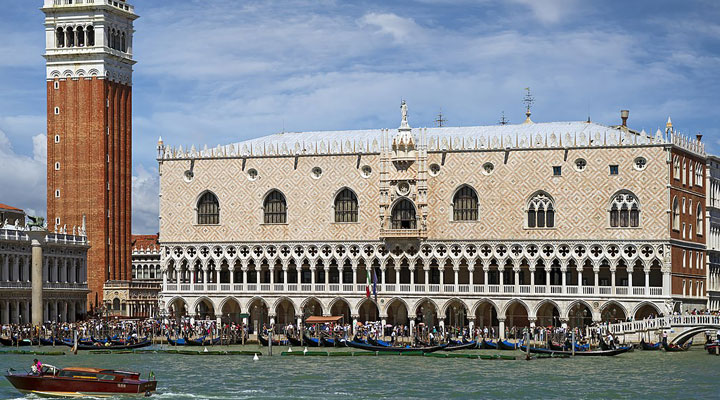 Castles in Greece: 10 iconic places to see in the ancient...