Dordogne is a rural department in the southwest of France which occupies a picturesque place between the Loire Valley and the Pyrenees mountains. Every corner of it literally breathes history! Among the vineyards, forests and hills, fortified cities and, of course, ancient outposts are comfortably located. They are so numerous, that the Dordogne is often called the region of a thousand and one castles. Many of them are open to the public and some are even some of France’s most famous landmarks. We have selected the most beautiful castles in Dordogne that you must visit.

Castle of Castelnau-Bretenoux is one of the finest examples of Dordogne medieval architecture. Its construction was started around 1100. The building was modified and modernized during the 15th century, making it perfectly prepared for defense. The castle was captured by England during the Hundred Years’ War in 1159, but after that it returned to the barons of Castelnau. The fire of 1851 badly damaged the outpost, but a French opera singer restored it to its former glory. Castelnau-Bretenoux is a great day trip option from Toulouse or Limoges.

Crowning the famous vertical village, Rocamadour Castle is one of the most memorable and impressive castles in the Dordogne. Even its spectacular location on a cliff above the Alzou Valley is enough to amaze the imagination! The holy city is included in the UNESCO World Heritage List and is part of the Way of St. James. In addition to the castle, there is a stunning chapel and a Romanesque-Gothic basilica.

Beynac Castle, perched on a cliff above the Dordogne River, is one of the best-preserved fortresses near Périgord. The 12th-century outpost is decorated in Romanesque style and can be reached via a spiral stone staircase.

François de Caumont, the owner of the castle of Castelnaud, built the castle of Milandes in the 15th century for his young wife, because she found Castelnaud castle too cold and unfriendly. Milandes is a fine example of Renaissance architecture with original stonework and antique features. The building was destroyed after the French Revolution, but it was successfully restored by legendary music hall star Josephine Baker. Unlike other Dordogne castles, the most famous era in the history of Milandes Castle falls on the 20th century.

Cross the river and visit Beynac’s mighty “colleague” – Castelnaud Castle! A real medieval playground, an artillery tower of the castle and an incredible collection of unique weapons fascinate visitors and easily outperform even the collections of the largest fortresses. Not surprisingly, Castelnaud attracts more visitors than other castles in the Dordogne.

One of the most beautiful castles in the Dordogne, with its classic style, it looks more like the castles of the Loire Valley than the local fortifications. Built in the 17th century, Hautefort probably stands on the remains of an old medieval fortress built on the site of a Roman settlement.

Castles in Dordogne: Castle of Val

A powerful feudal fortress was erected in 1440 by the d’Estaing family. After the construction of the dam, the castle with six towers on the sides was surrounded by water. Its exceptional view is one of the most famous in the region. Every year, the site administration of the castle organizes various exhibitions, and also invites dozens of musicians to perform in open-air concerts at sunset. This place can be described in one word: perfection! 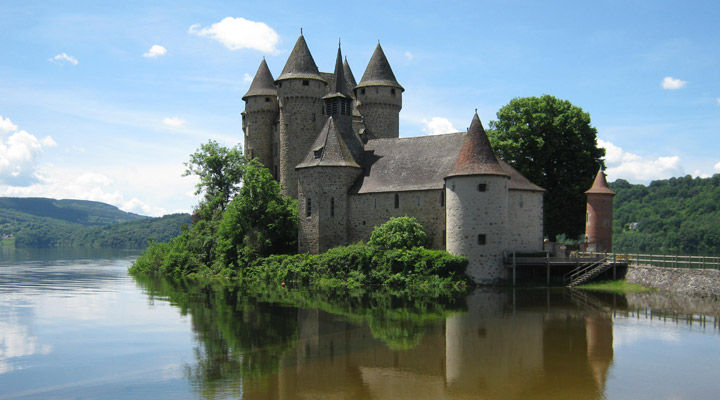 Know more about this place:
Castle of Val

One of the best Renaissance castles in the Dordogne region! This little gem, with its fascinating history and great views of the Tour de Saint Laurent, tops the list of places to visit. Restored antique rooms, a richly decorated staircase and a courtyard filled with stucco and sculptures… Hello Versailles!

This luxurious residence, built during the French Revolution, is closed to visitors. Nevertheless, it is worth coming here – in order to see the famous Marquessac garden, founded more than 300 years ago. Its figured labyrinth consists of more than 150 thousand old boxwood trees, and its total length exceeds 6 kilometers!

The first tower of the Jumilhac castle began to be erected in 1152, but the work was completed only in the 17th century. The ancient building, listed as a historical monument, was rebuilt several times during the Renaissance. Today its roof is often referred to as “one of the most romantic roofs in France”.

Plitvice Lakes National Park: one of the most beautiful places in...