Home Destinations The Residences of the Royal House of Savoy: centers of power of...
DestinationsEurope

The Residences of the Royal House of Savoy: centers of power of the Dukes of Savoy

Turin has castles and royal palaces of outstanding historical and artistic value. They are part of an architectural and urban plan designed to create perfect neighborhoods around the city. Together they are known as the Residences of the Royal House of Savoy (another name is the Crown of Delights of the House of Savoy). They were built between the 16th and 17th centuries and simultaneously served as centers of power and territorial control, as well as places for solitude and relaxation. Residences of the Royal House of Savoy are 22 palaces and villas built in and around Turin by the Dukes of Savoy since 1562. One half of them is located in the city center, and the other half – in its vicinity. Don’t forget to include some of the most interesting places in your city itinerary!

The Residences of the Royal House of Savoy: Royal Palace in Turin

The Royal Palace of Turin is one of the most important Residences of the Royal House of Savoy. Its architecture was heavily modernized by Christine Marie of France in the 17th century. The palace was designed by Filippo Juvarra. The place where the residence is located once belonged to the Bishop’s Palace in Turin. From here, the duke had the opportunity to observe the Palatine Gate.

Carignano Palace is located right in the center of Turin. Now it houses the Risorgimento Museum, and originally it was the private residence of the Prince of Carignano. The building is known for its unique circular façade. Construction of the palace was started in 1679 by order of Prince Emanuele Filiberto of Savoy, son of Tommaso Francesco.

The Residences of the Royal House of Savoy: Villa della Regina

Villa della Regina (Villa of the Queen), located in the vicinity of Turin, is famous for its paintings of the 17th and 18th centuries, original antique furniture and a huge Italian garden with a large fountain and a marble statue of the god Neptune.

On the main square of the city stands magnificent Palazzo Madama. From certain angles, it looks like a castle, and this is not a coincidence: the building has a long history. In the first century BC, this place was the gate of the Roman wall. It was later turned into a defensive castle and, in the 1600s, into a luxurious royal residence. The palace got its name due to the fact that its interiors of the 17th and 18th centuries were commissioned by two Queens of the House of Savoy.

The Residences of the Royal House of Savoy: Aglie castle

For more than seven centuries Aglie castle was owned by dukes, princes, and kings. It once belonged to the Marquises of San Martino, but today its noble past is evidenced by the variety of original decor that can be seen in its numerous rooms (and there are more than 300 of them here!). It houses unique furniture and precious eclectic collections, ranging from paintings and archaeological finds to amazing ornithological and oriental displays. The complex is surrounded by a park with ancient trees and huge greenhouses.

Valentino Castle, located on the banks of the River Po, features a distinctly French style associated with the many changes it has undergone since the end of the 17th century. Today it houses the Faculty of Architecture and Design of the Polytechnic University of Turin.

The Residences of the Royal House of Savoy: The hunting lodge of Stupinigi

The luxurious Hunting Residence of Stupinigi is just around the corner from Turin. This unique complex impresses with its size and luxury. In the 18th and 19th centuries, members of the Savoy Dynasty held lavish parties and wedding ceremonies here. 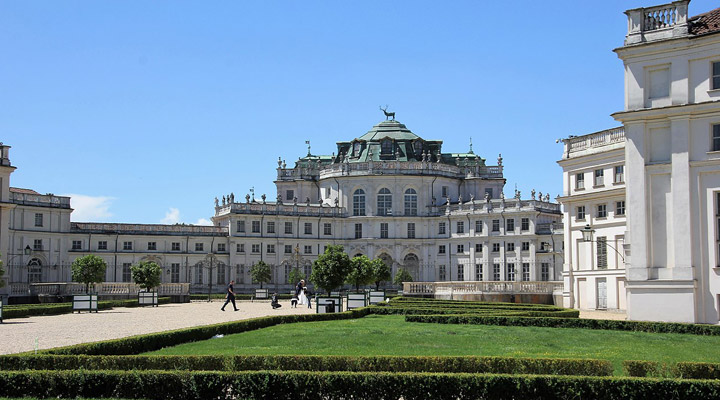 To know more about this place:
The hunting lodge of Stupinigi