In every city there is that unique street, which attracts tourists more, than all the others. In ancient European cities, these are narrow, winding medieval streets with preserved medieval houses. However, San Francisco in California cannot boast of ancient history, as it is a relatively young city. Still, it has an unusual place that has attracted attention for years. It is called Lombard Street. Rather, not so much the street itself as its segment, which stretches from the Presidio to Embarcadero in Russian Hill and Telegraph Hill neighborhood.

Lombard Street, which took its name from the street of the same name in Philadelphia, is considered “the crookedest street in the world.” 400 meters of it have natural 27% grade, which is completely unacceptable for traffic. 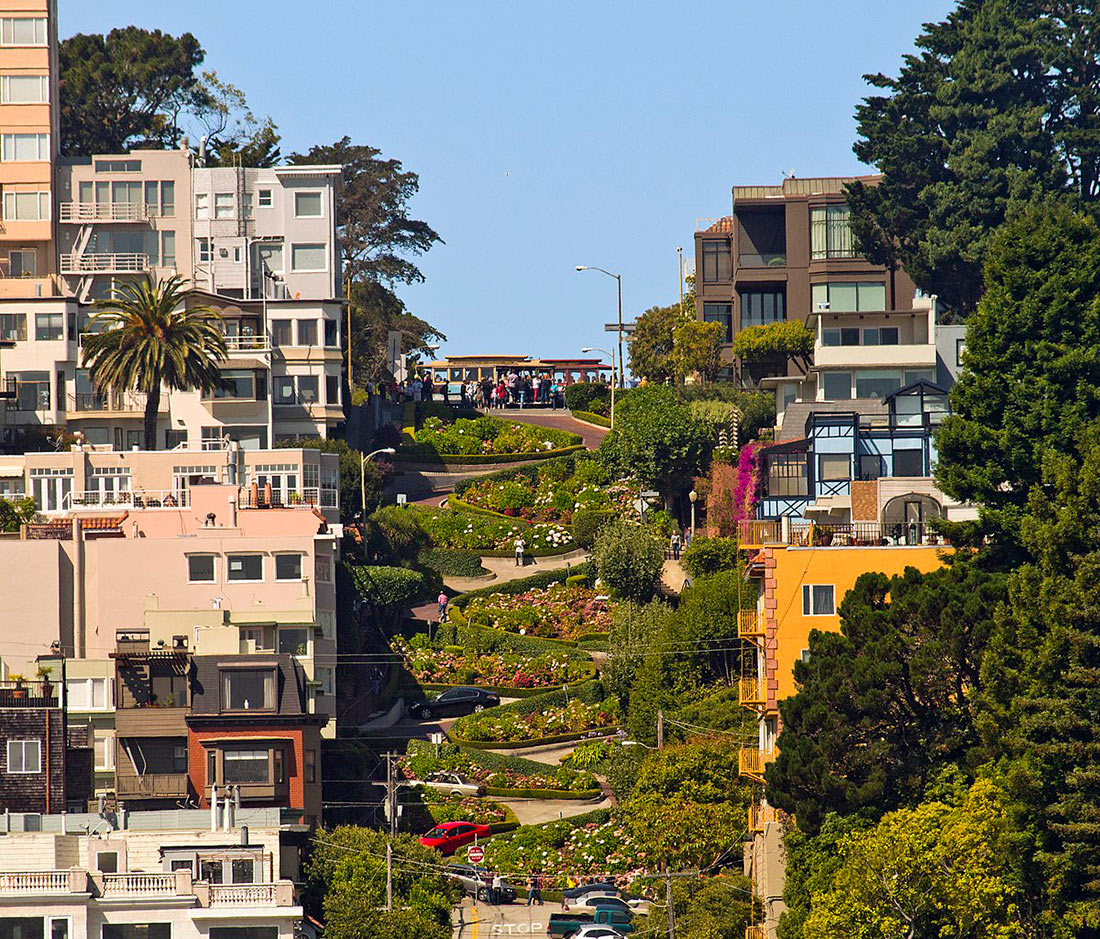 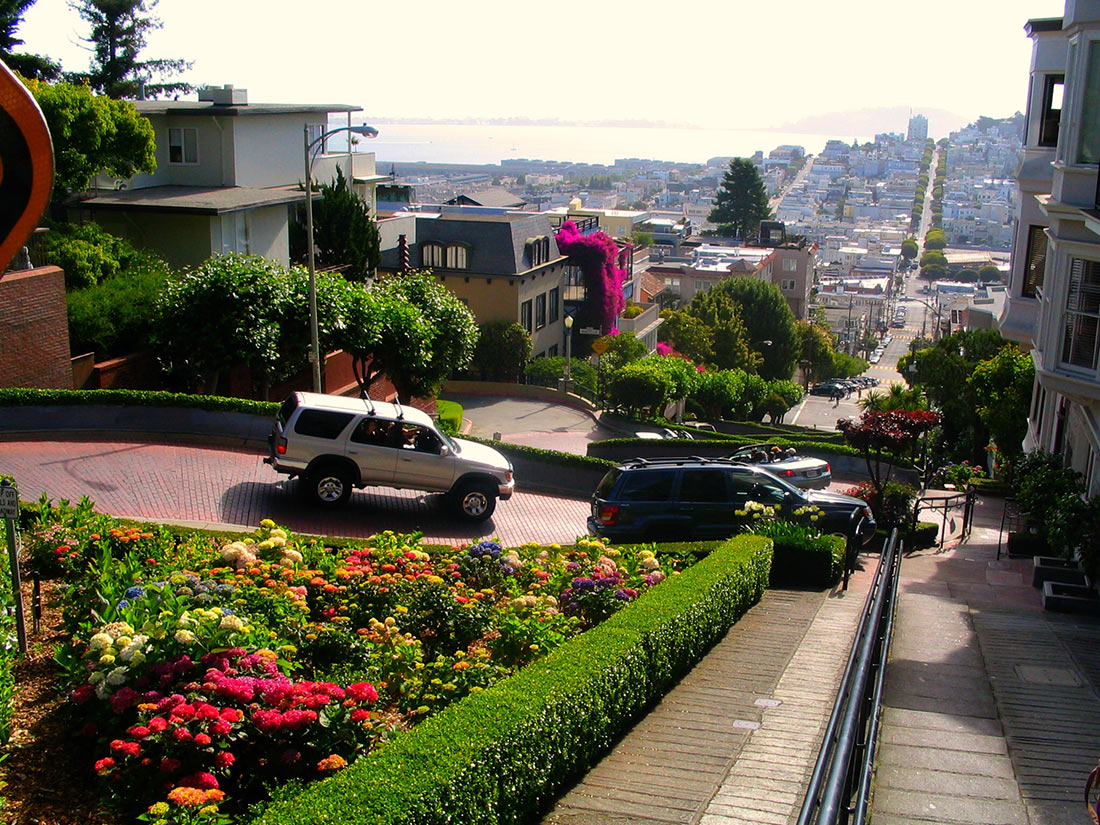 Lombard Street in California is a must-see destination and is included in all guidebooks and hiking trails. It is deservedly considered the most winding street in the world. 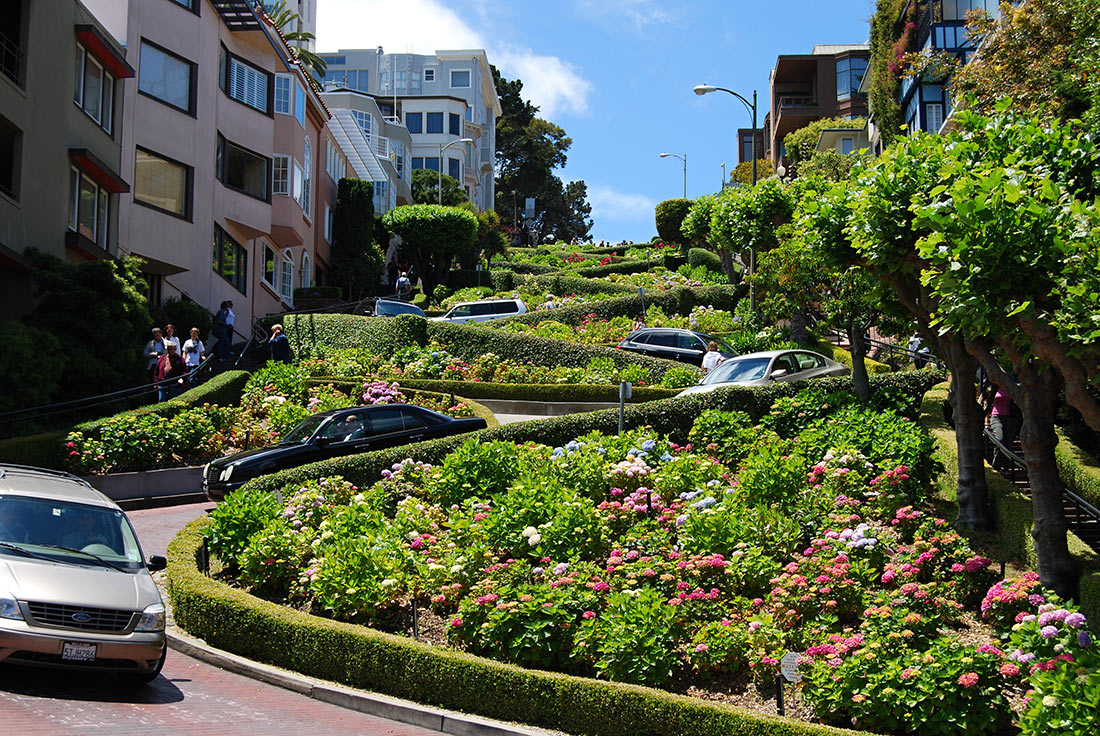 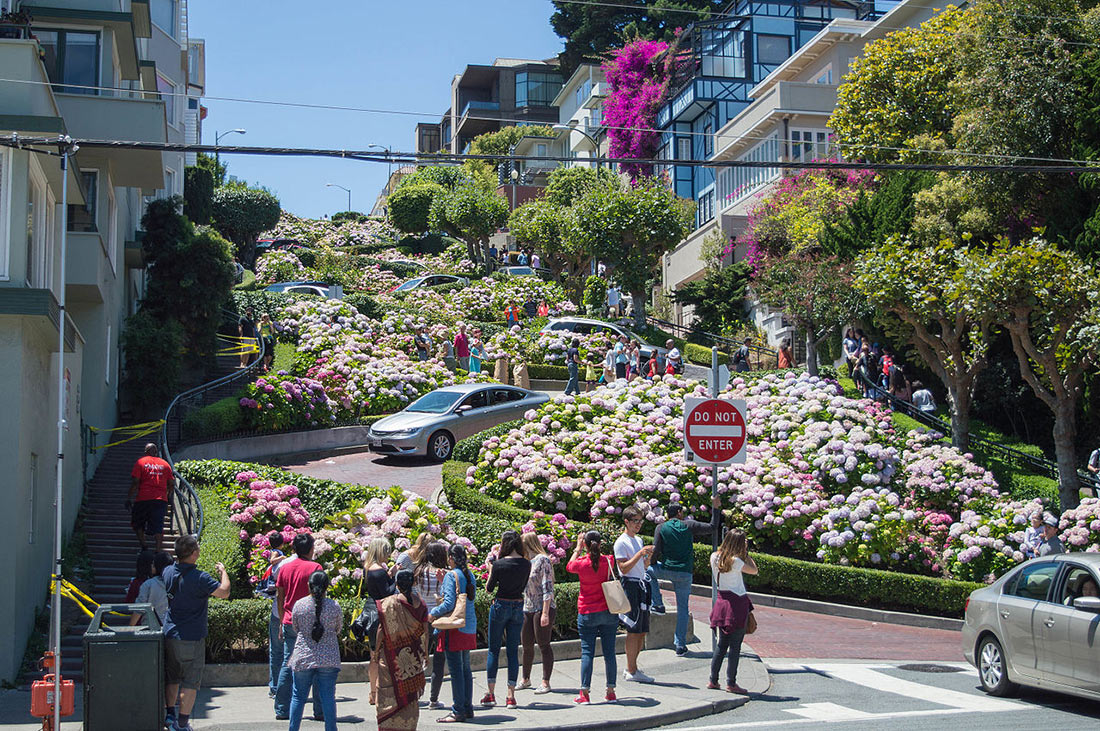 Just about a hundred years ago, Lombard Street was absolutely straight, unremarkable street. But with the beginning of the mass distribution of cars, it turned out to be impossible to drive through it: any vehicle could overcome such steepness, because the street literally fell down the hill to its foot. 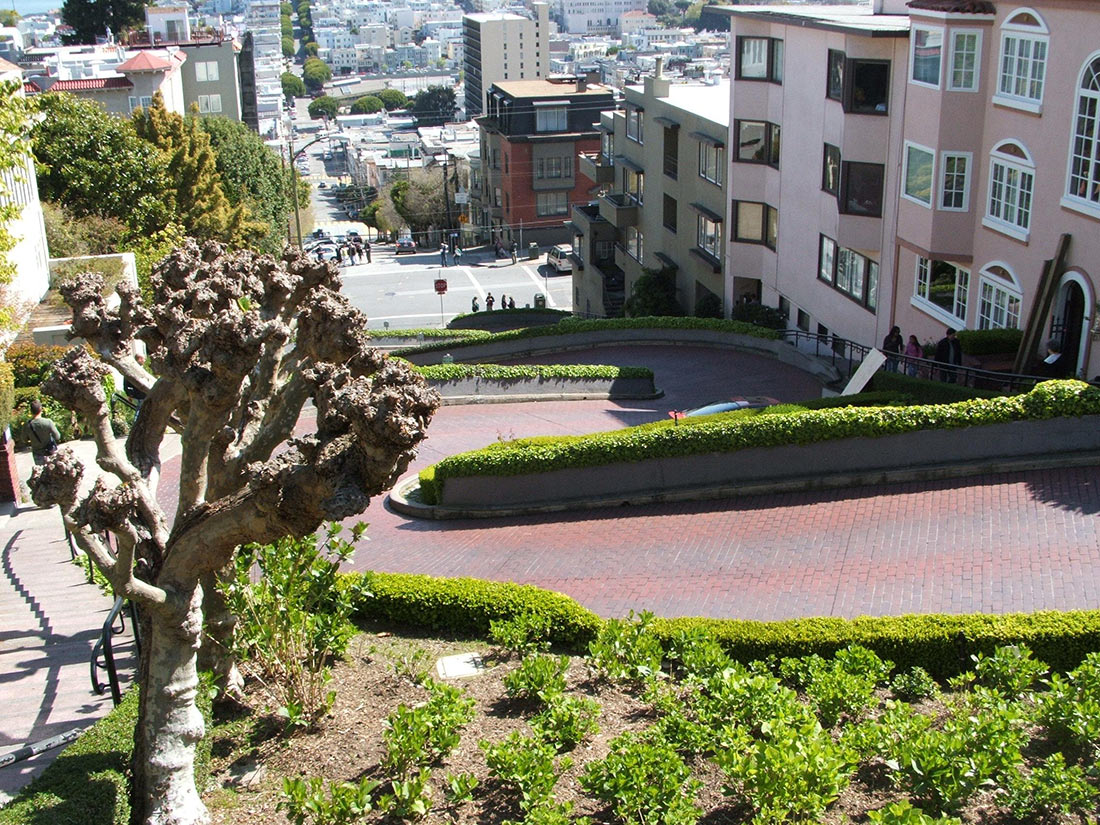 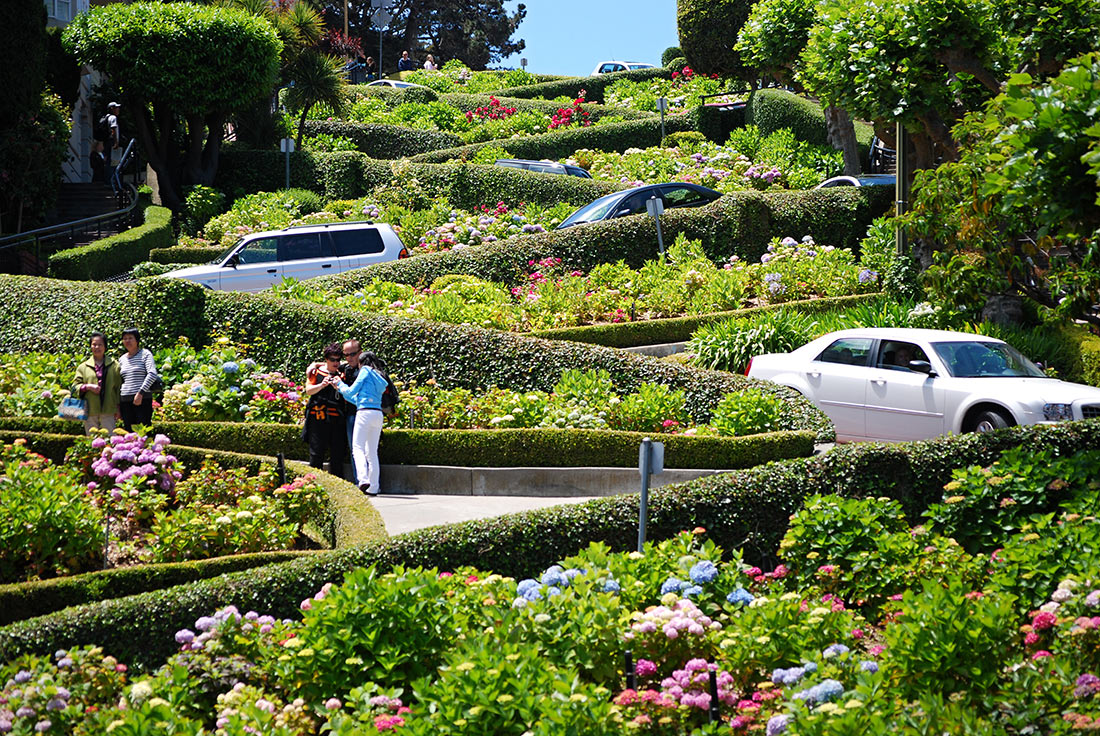 In 1922, the city authorities solved this problem in a peculiar way. On the side of the hill, a serpentine road with eight turns was built. This helped bring the incline down to 16%. Traffic is one-way here: from top to bottom, and parking is strictly prohibited. The recommended driving speed is very limited, at only 8 kilometers per hour, which makes queues of cars quite frequent here. 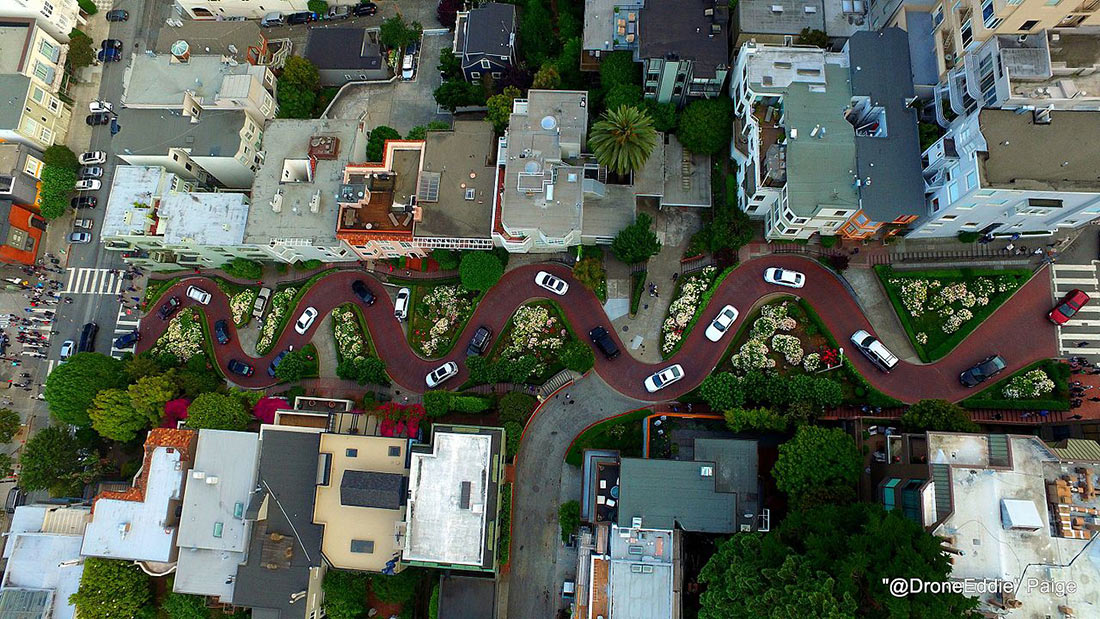 Red brick, which is used as a pavement instead of the more traditional asphalt and paving stones, adds special charm to this small section of the road. 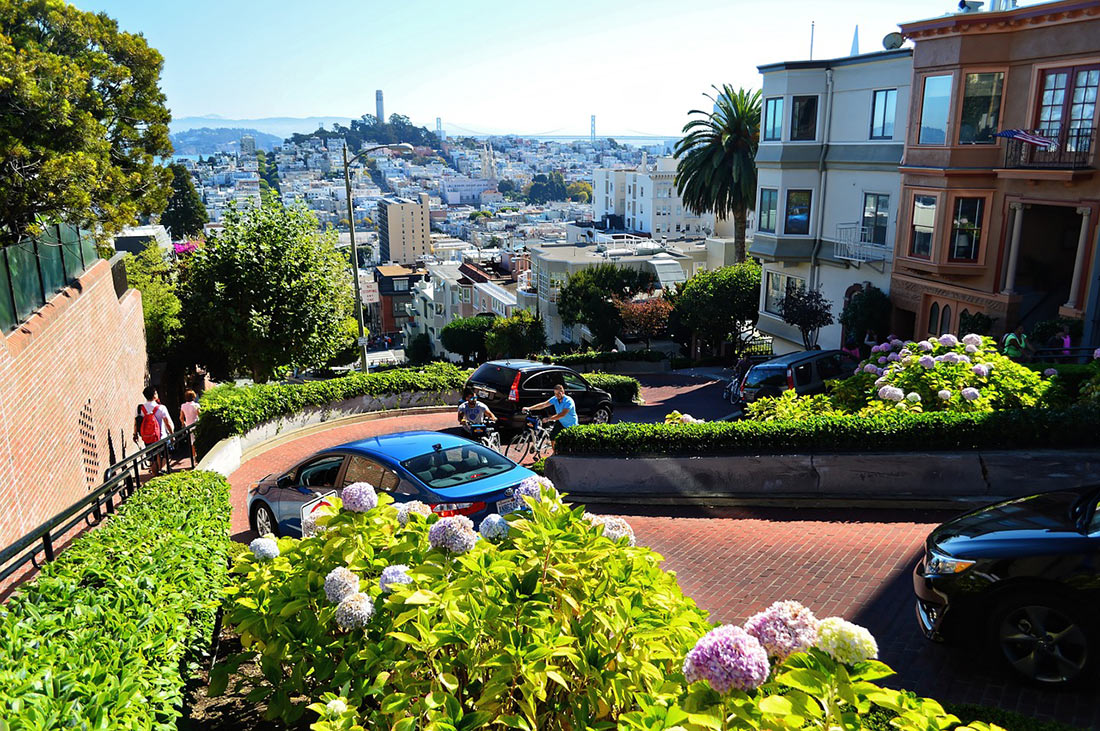 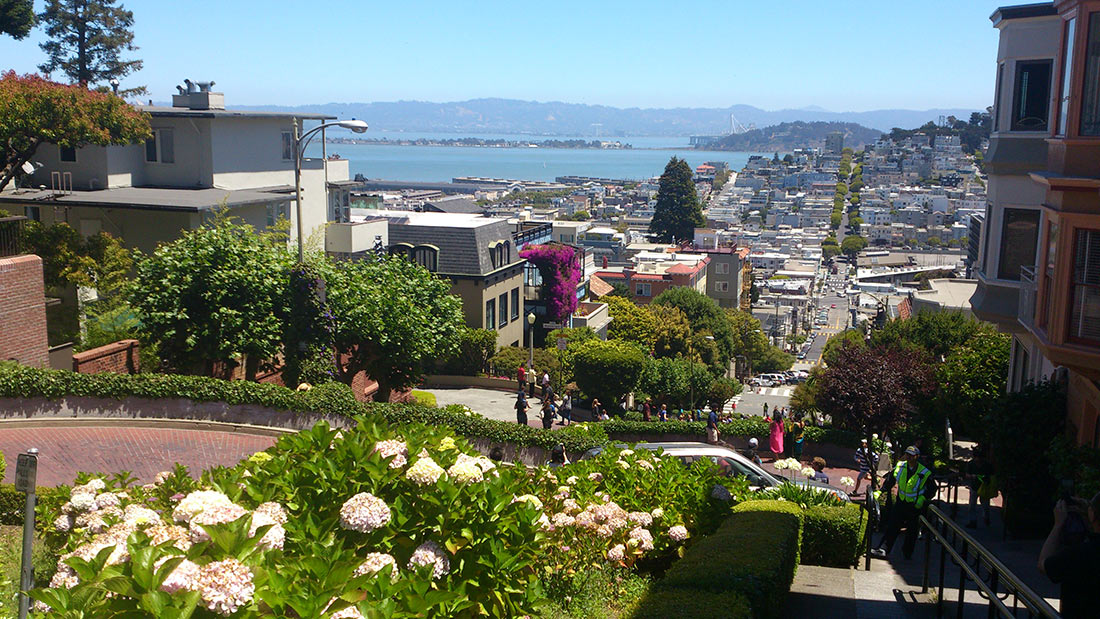 It is not a surprise that traffic problems along this segment sometimes occur. But in the city council there is a special group of workers, whose duties include their prompt decision. 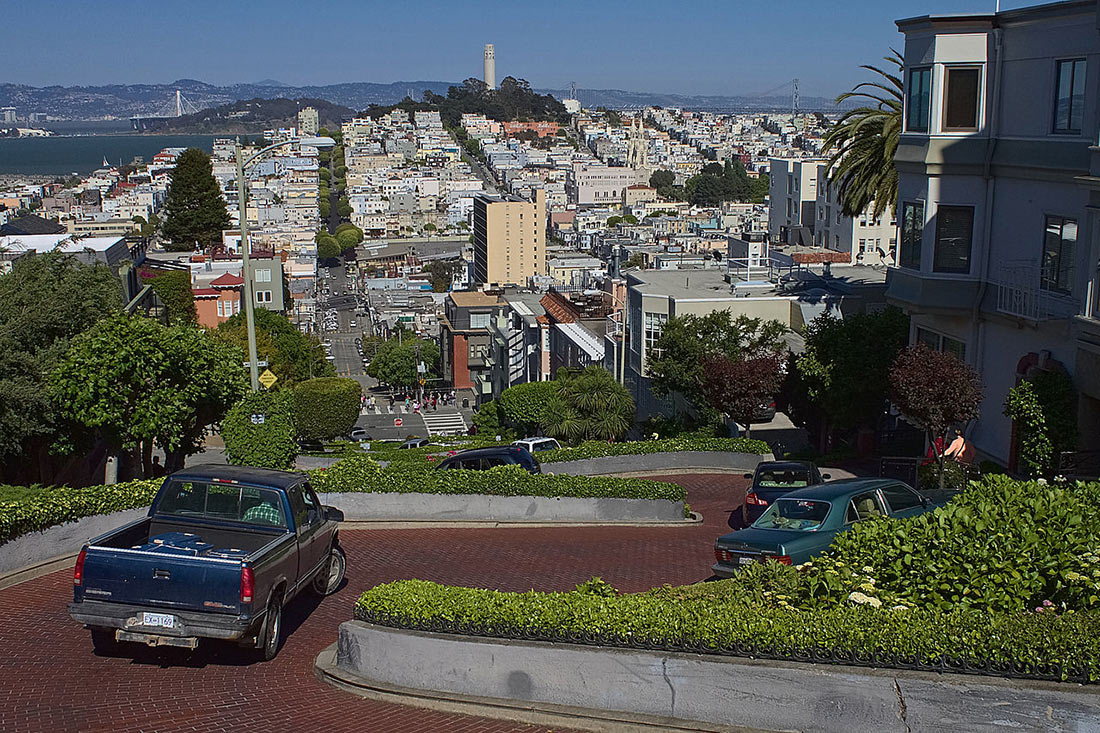 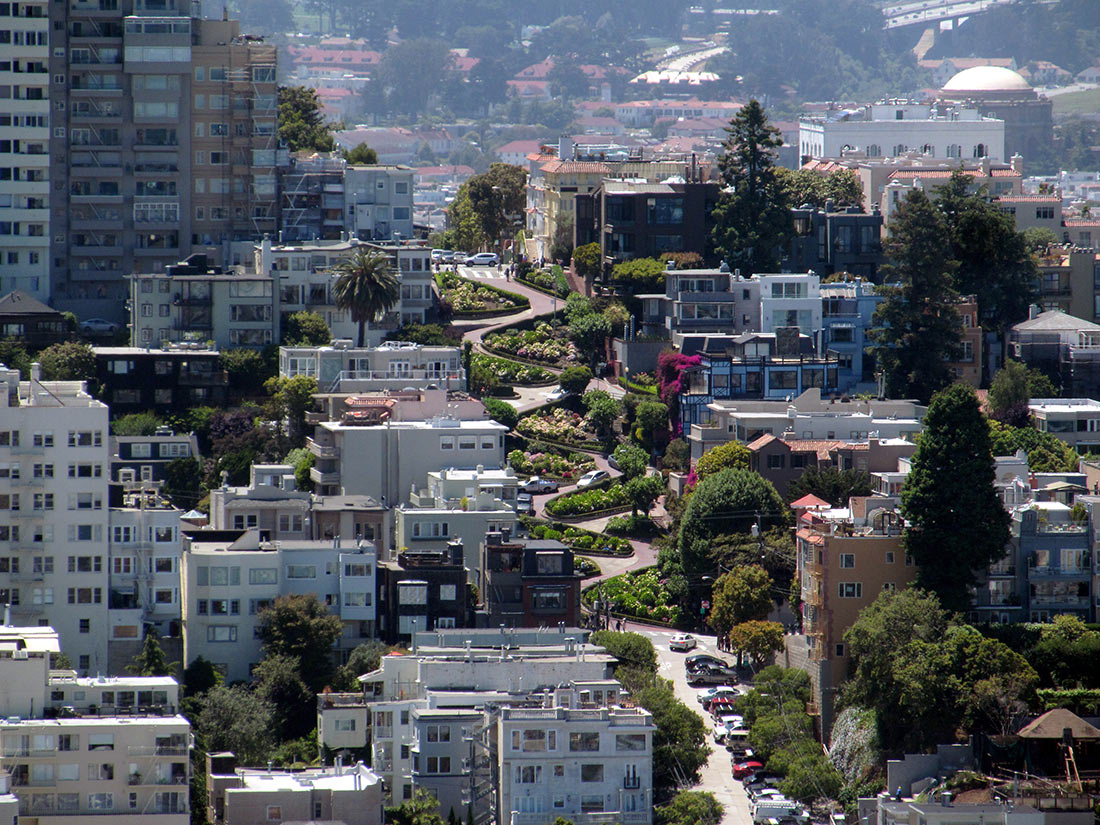 Red color of brickperfectly blends with the green of the trees, which align Lombard Street. This place looks especially bright and attractive in spring and summer, and thanks to lush flower beds and colorful mansions, it has become a popular place for photo shoots. 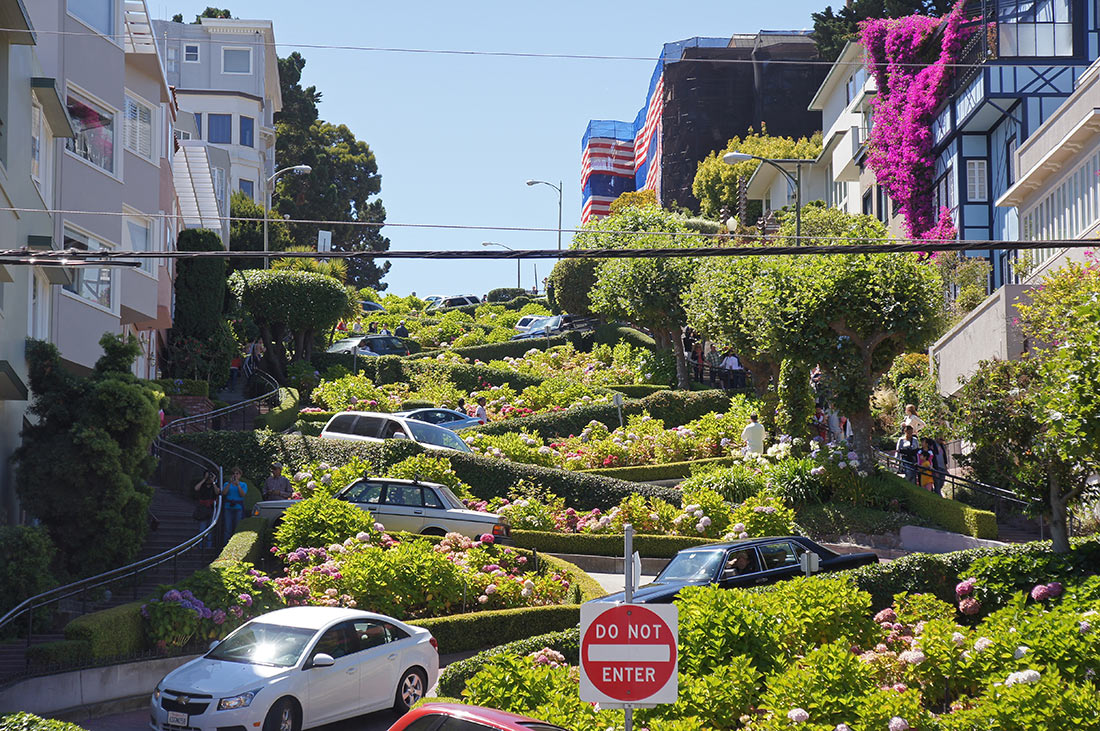 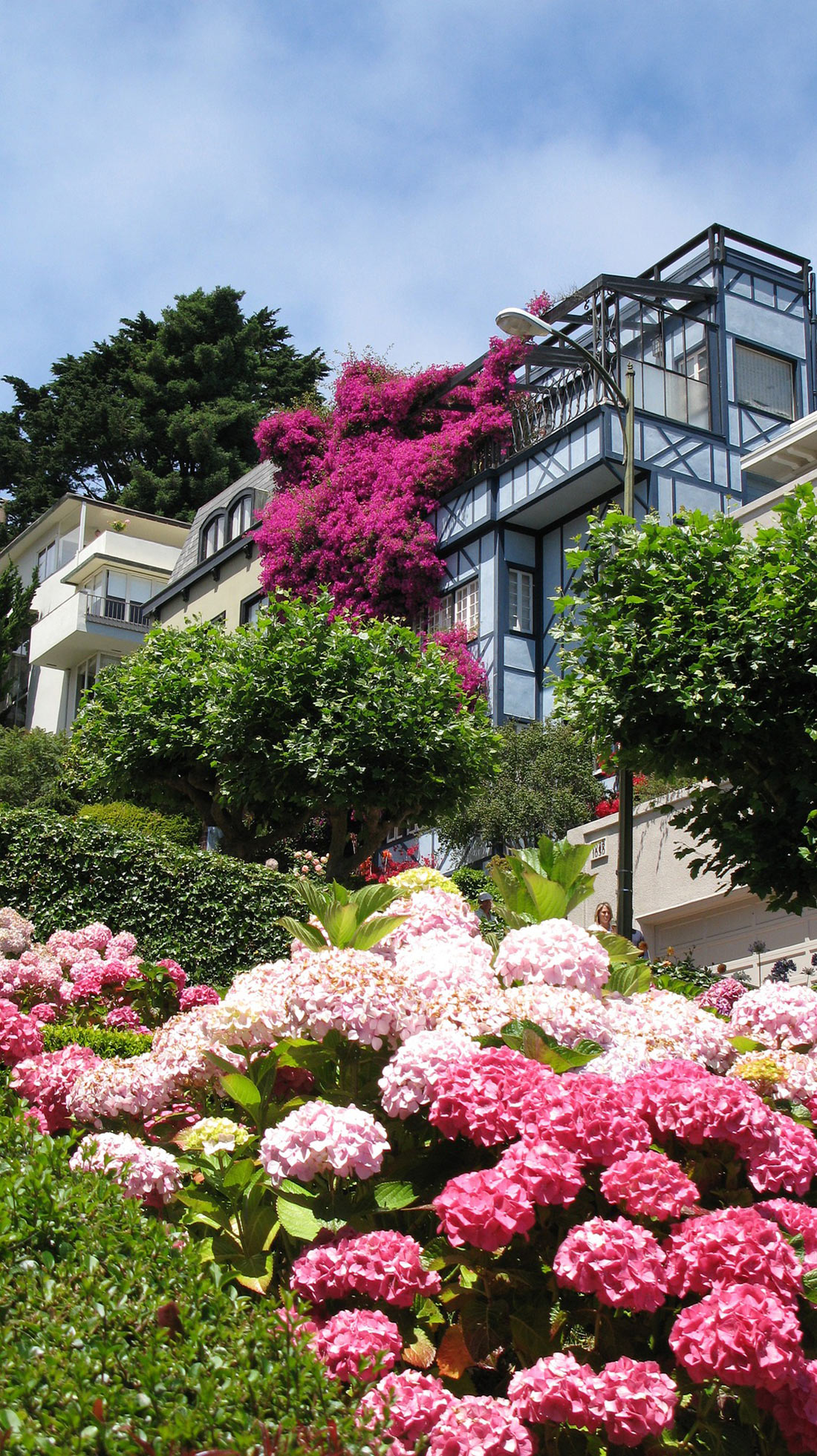 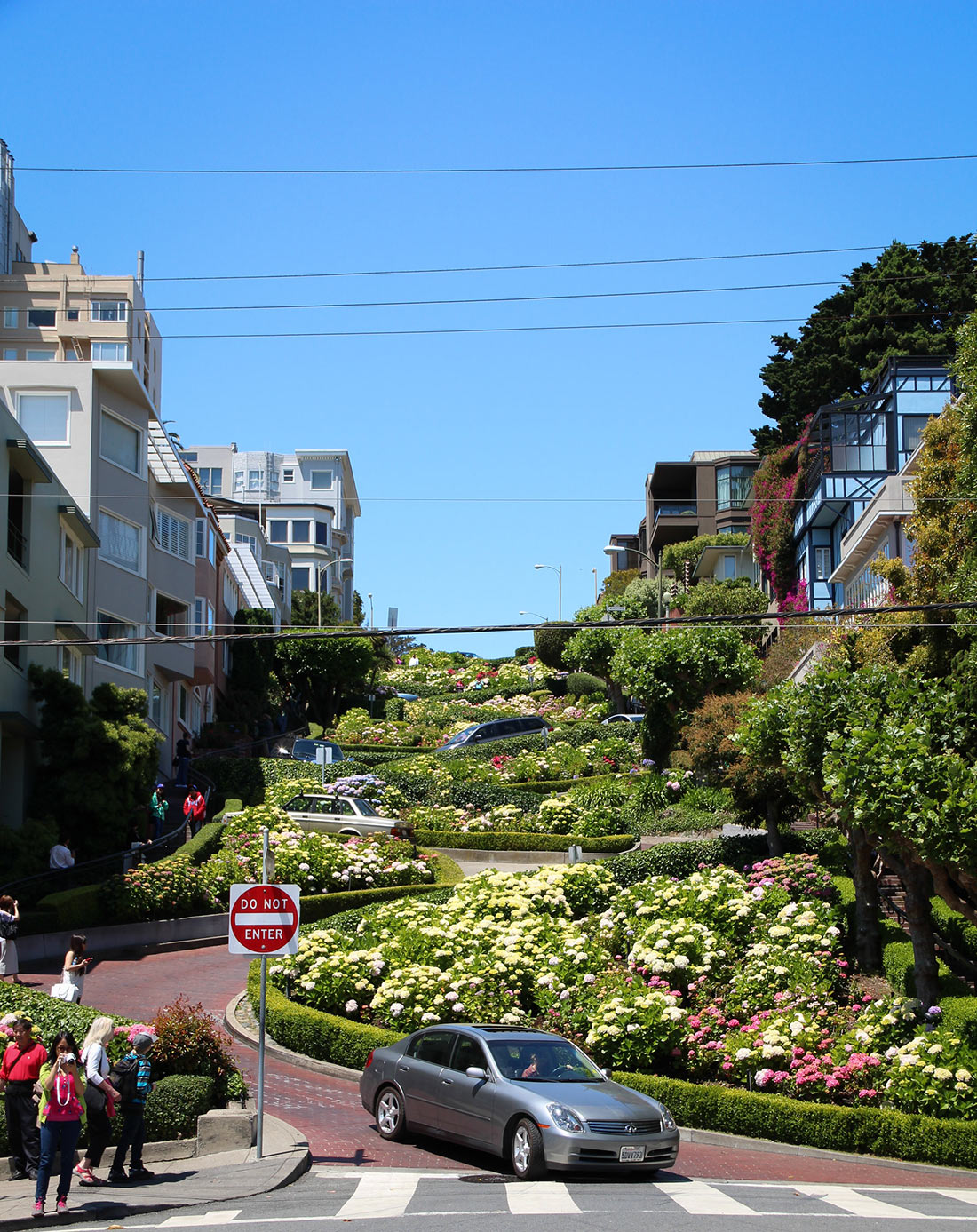 Facebook
Twitter
Pinterest
WhatsApp
ReddIt
Telegram
VK
Viber
Previous articleDades Gorge: one of the most fascinating canyons in the world
Next articleMost beautiful beaches of Spain: the best places for those who need an exquisite bliss