Travel site
Home Destinations Santorini: the most romantic island in the world
DestinationsEurope

Santorini is one of the southernmost islands of the Cyclades in the Aegean Sea. It is mainly known for its volcano, the largest eruption of which occurred 3,600 years ago. The wave it caused was so high that it washed away almost half of the island, covered with ash Minoan settlement of Akrotiri in the south and, reaching the northern coast of Crete, destroyed the Minoan cities there, among which was the ancient Knossos, where the famous Palace of Knossos was located.

Before this eruption, the island was called Strongila because of its circular shape. As a result of the eruption, two more separate islands were formed – Thirassia and Aspronisi, which, together with Santorini, form a circle with a caldera in the center. After another volcanic eruption in the 17th century, two more small islands were formed inside caldera – Nea Kameni and Palea Kameni. 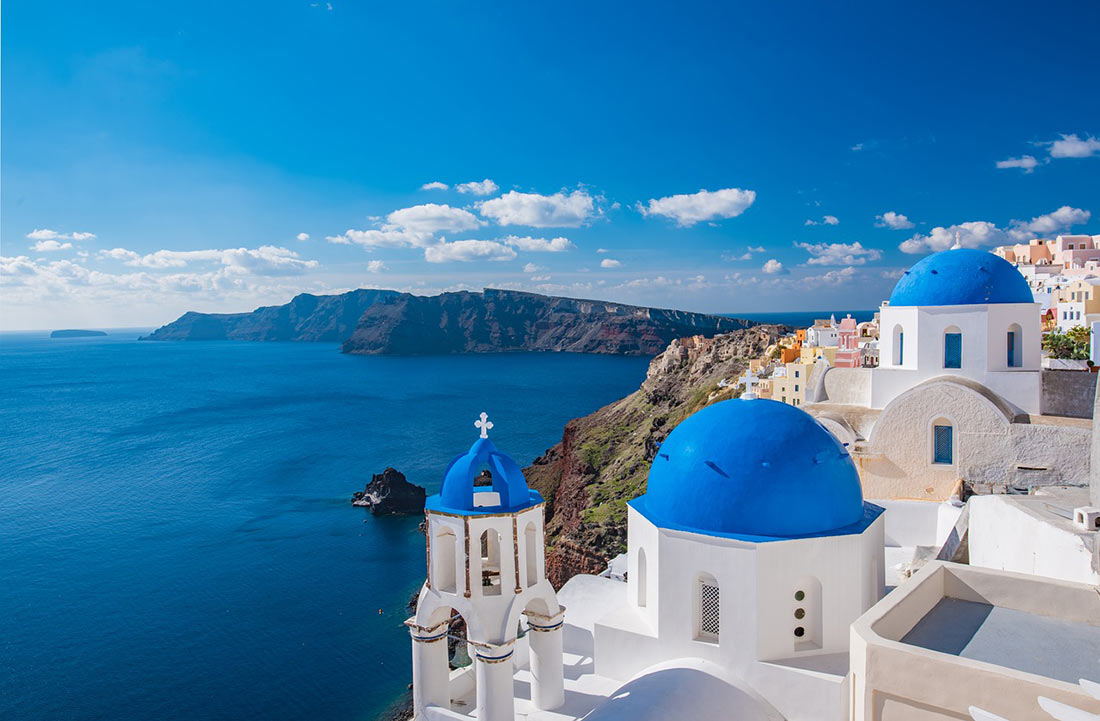 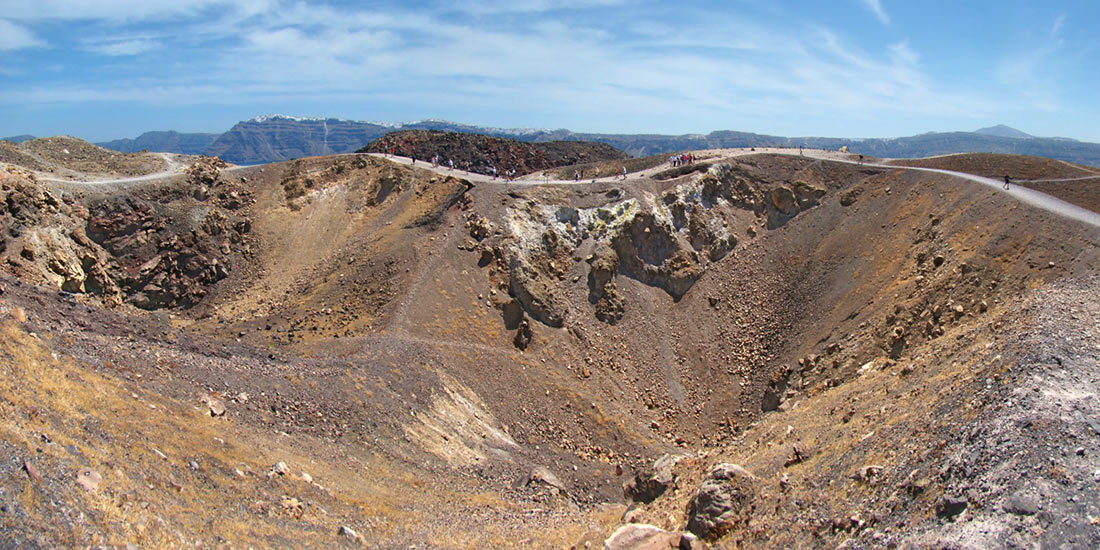 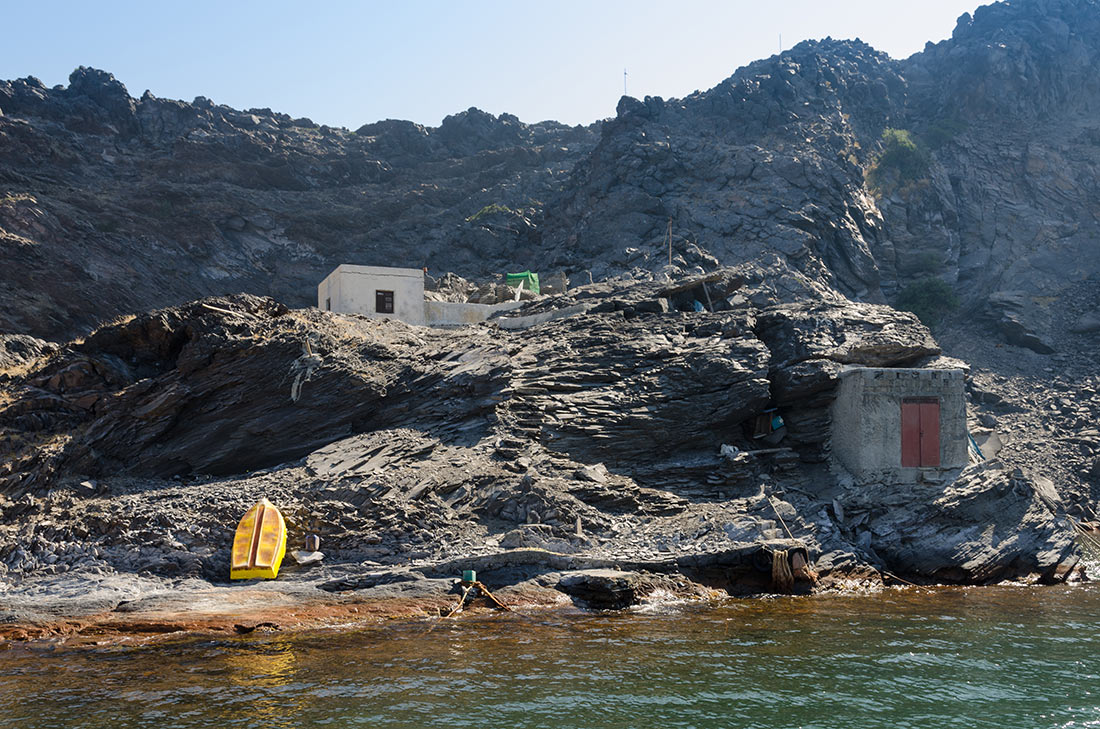 Santorini is an island with a rich history dating back centuries. Ancient ruins were discovered in the Akrotiri area in 1963, providing more information about the civilization that inhabited this area in 2000 BC, before it was buried under volcanic ash in 1650 BC. 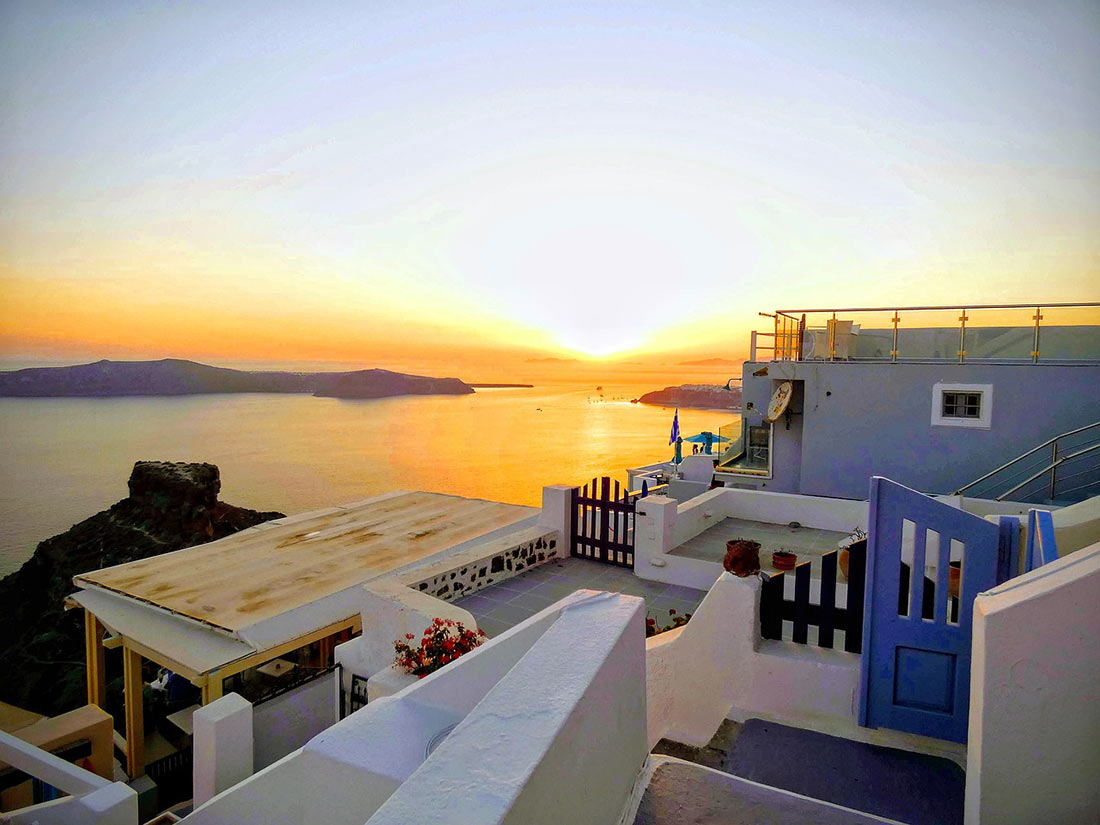 The east coast of Santorini is less well known than the famous west one. Here the edges of the caldera drop down right into the sea, and local beaches and resorts with volcanic sand are more accessible. 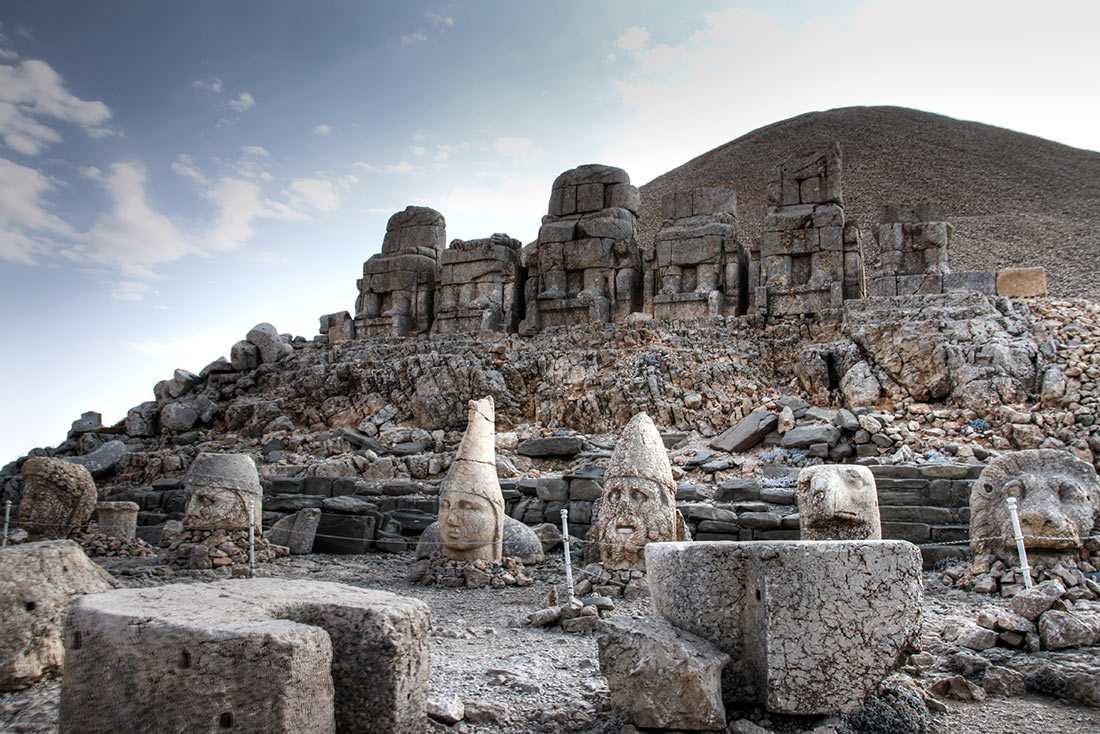 The famous volcano is the best known landmark of Santorini. It is located on the island of Nea Kameni, which is easily accessible from Fira. The nearby island of Palea Kameni has hot springs that are said to have healing properties. 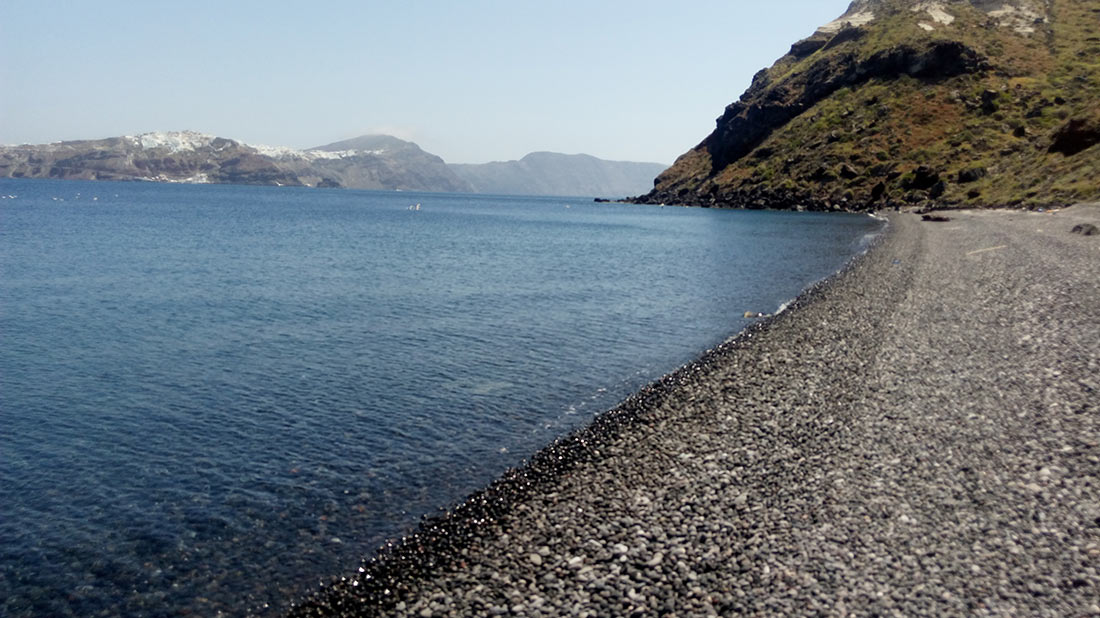 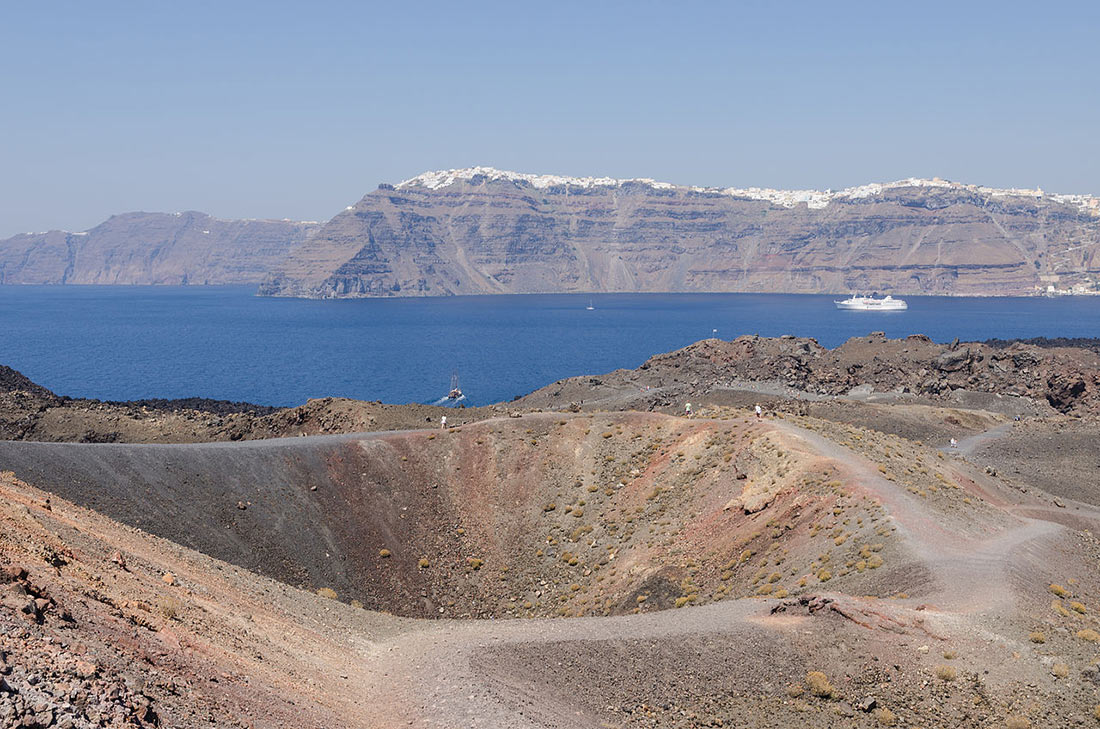 This is undoubtedly one of the natural wonders of our planet. A volcanic explosion that occurred here over 3,500 years ago, changed the topography of the Mediterranean coast forever.

Ancient Tera are, in fact, the ruins of a cliff-top city near Kamari. The way upwards is a bit tricky, but this is one of the must-see attractions in Santorini. It features a stunning view on the Aegean Sea! 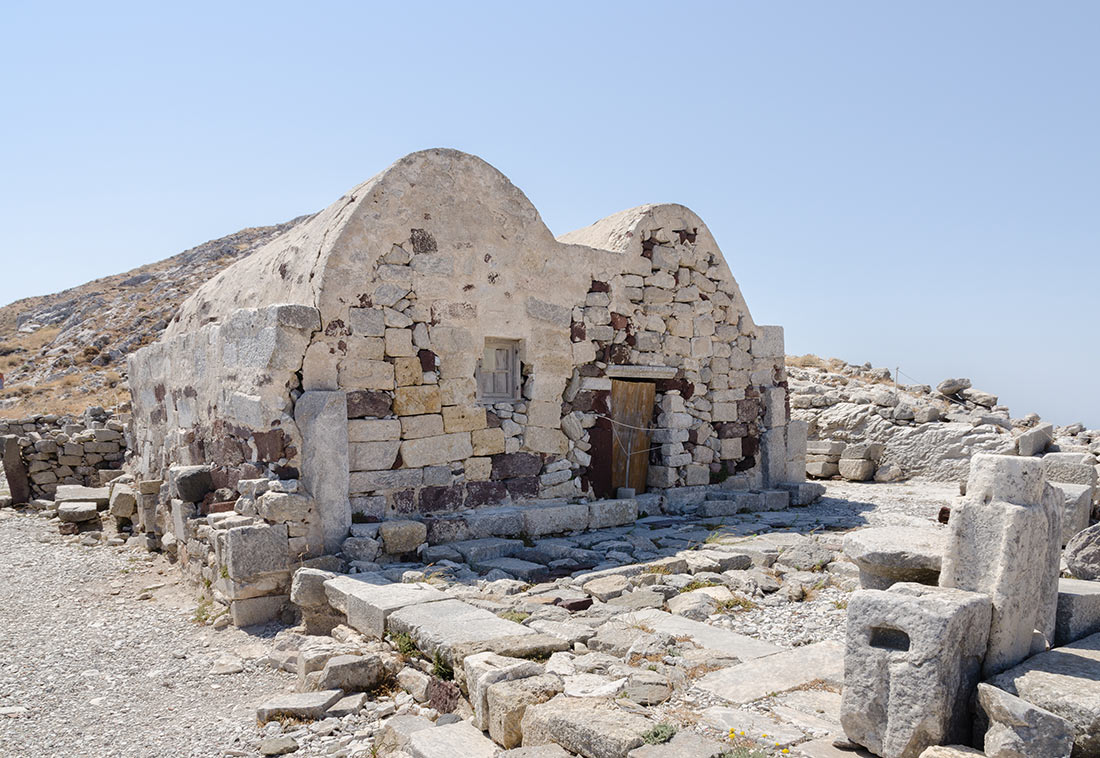 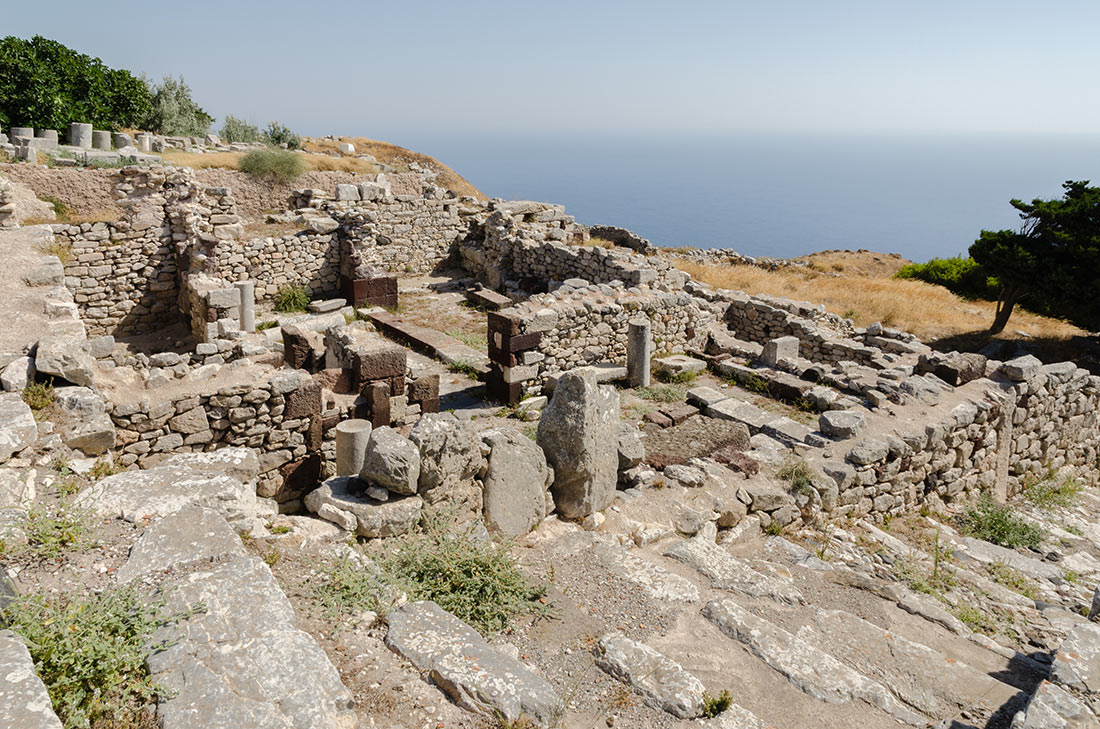 This castle, located in the center of Pyrgos, was built in the Middle Ages. Some walls of the ancient structure can be seen nowadays. 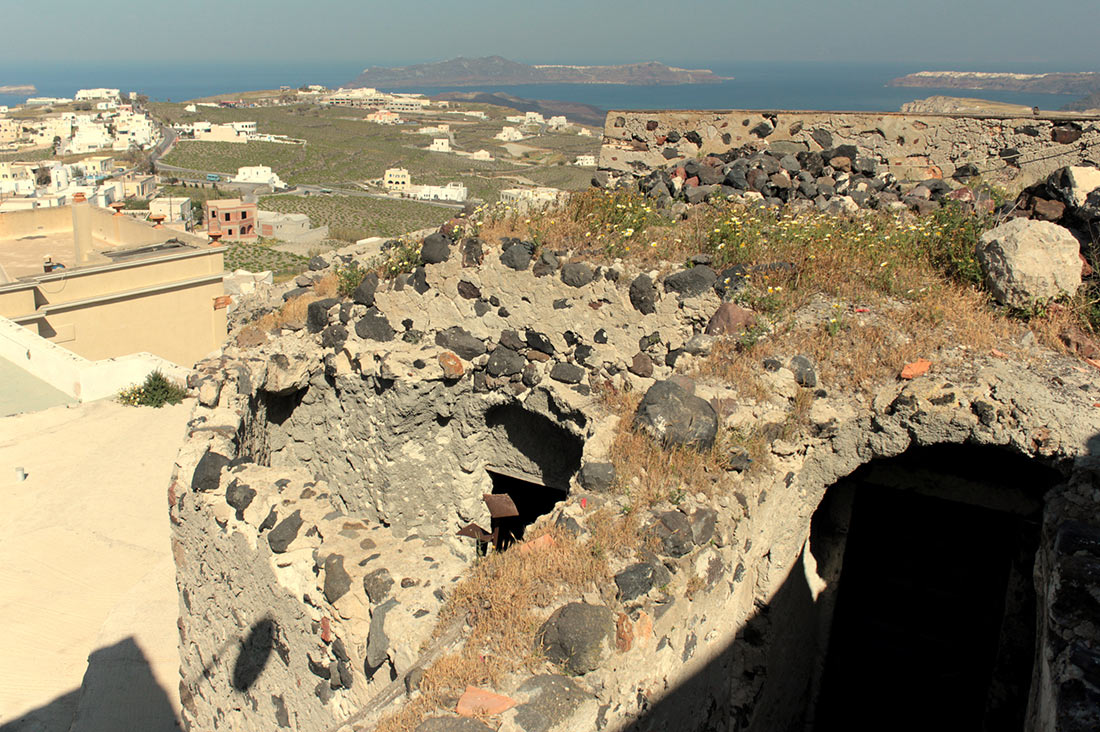 This is one of the oldest lighthouses in Greece: it was built in 1892. Here you can enjoy stunning views of the Caldera and the Aegean Sea. 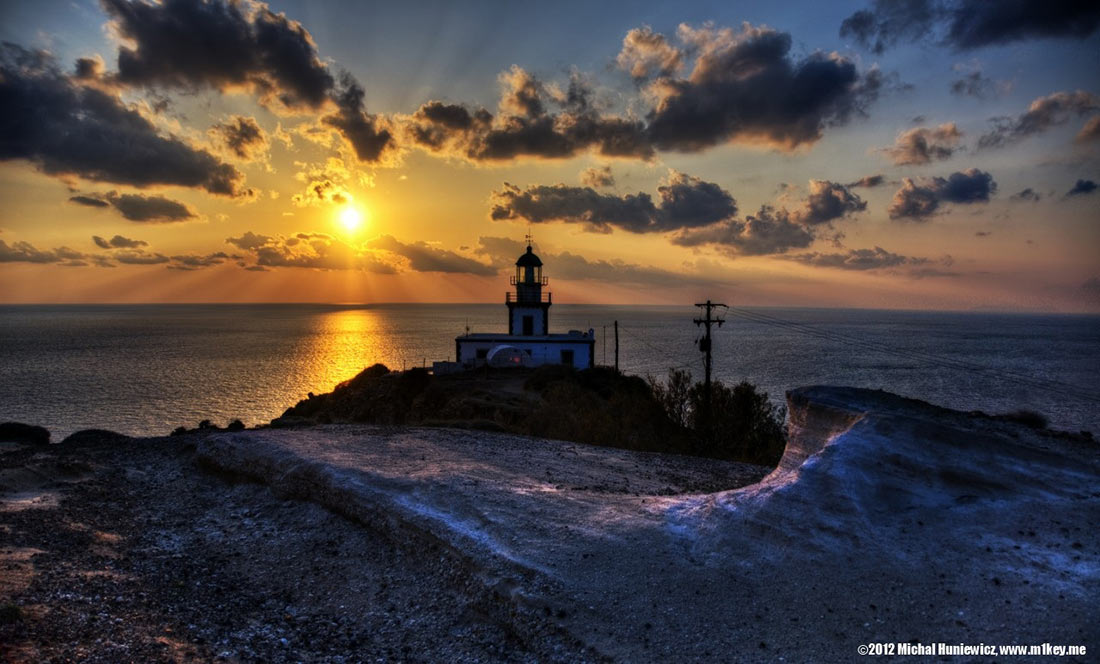 It is located between the villages of Imerovigli and Firostefani. The monastery, founded in 1674, features valuable relics and Byzantine icons. 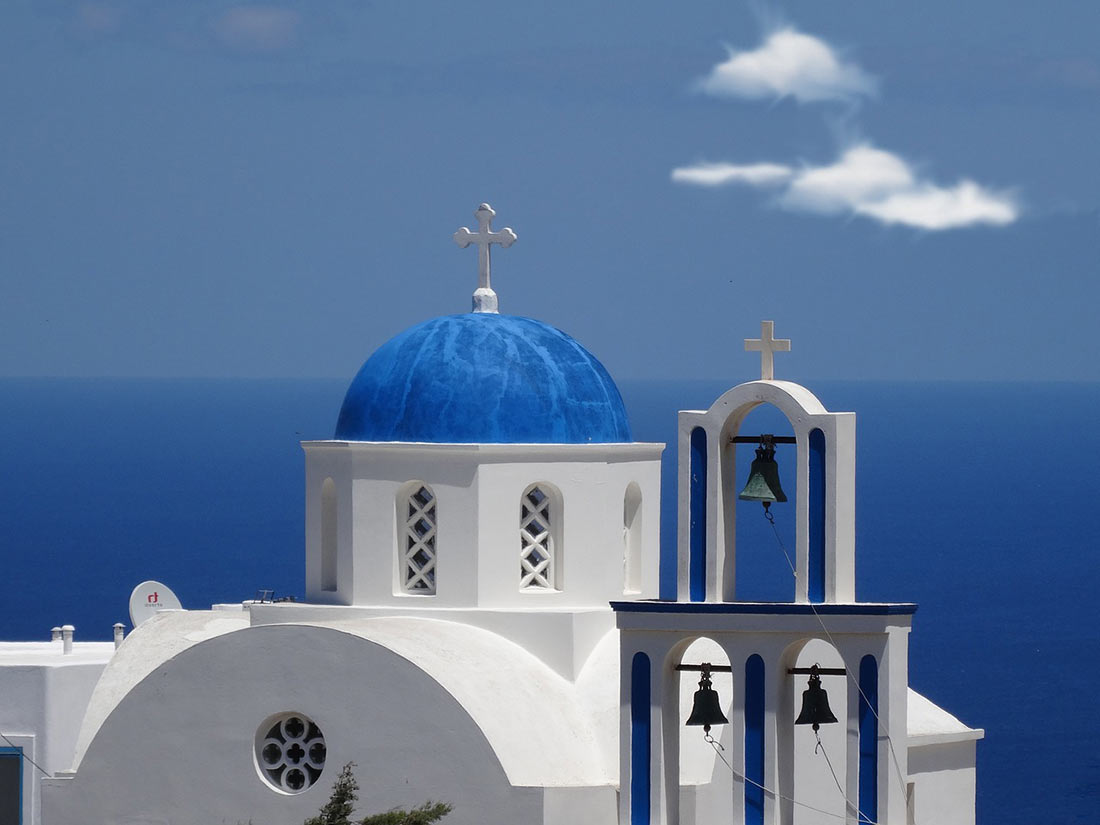 Located on the central square of Perissa, the Church of the Holy Cross is one of the largest religious buildings in Santorini. It was originally built in the 19th century, but had to be reconstructed after the 1956 earthquake. 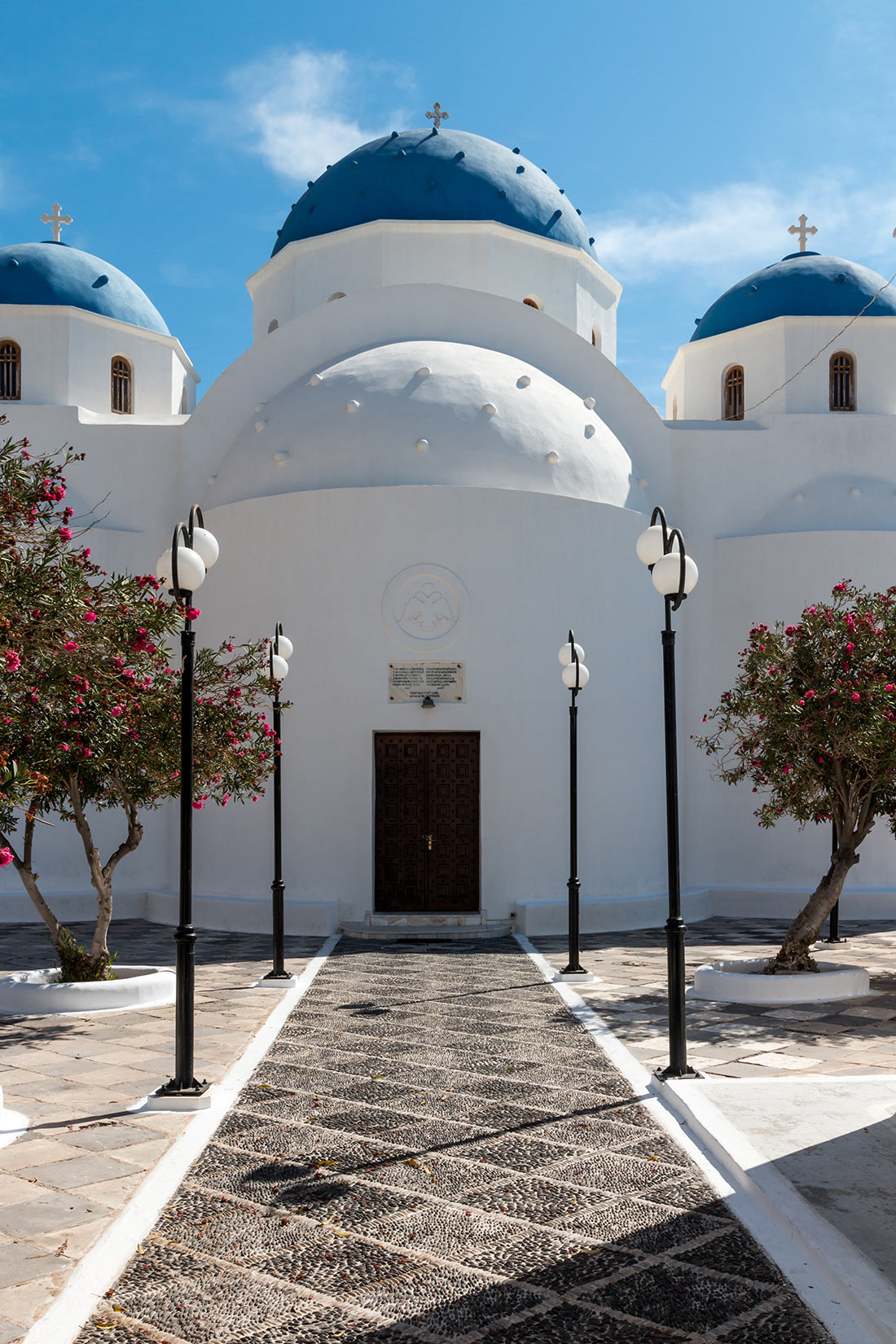 The most amazing thing about Santorini is the architecture of the villages built right on the edge of the caldera. These picturesque villages are notable for their sugar-cube houses, cobbled streets, beautiful churches and of course, breathtaking views of the Aegean Sea. In the city of Oia, you can enjoy the most romantic sunset when the orange sun literally plunges into the sea. This special atmosphere has made the island of Santorini a popular destination for weddings and honeymoons. 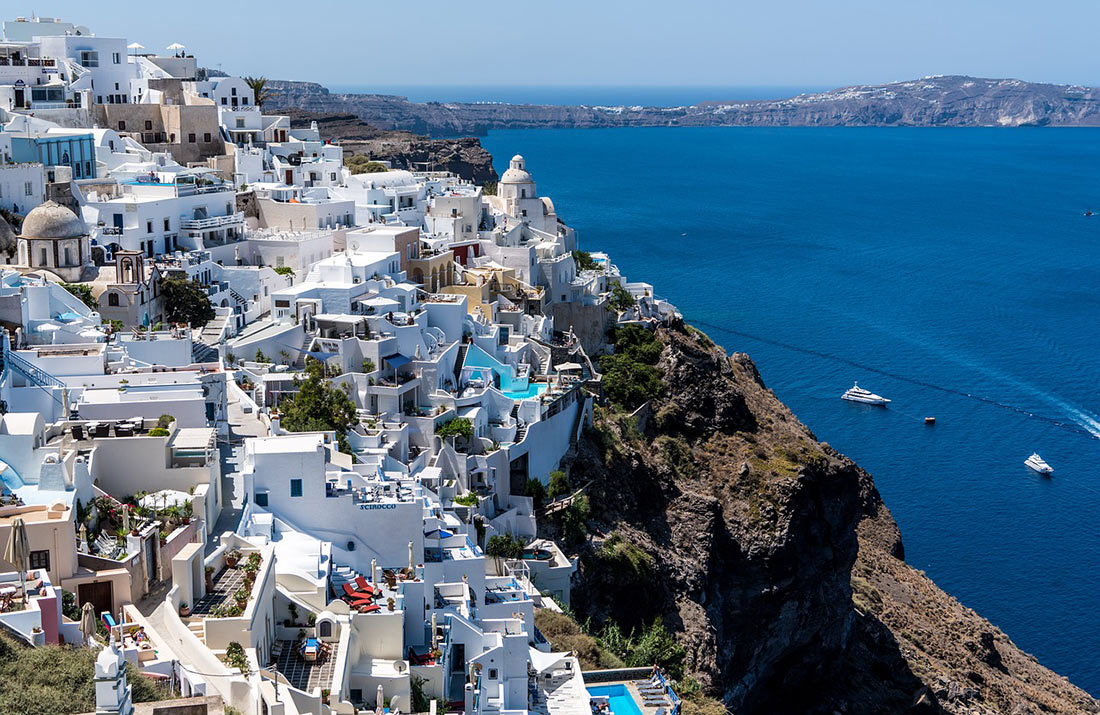 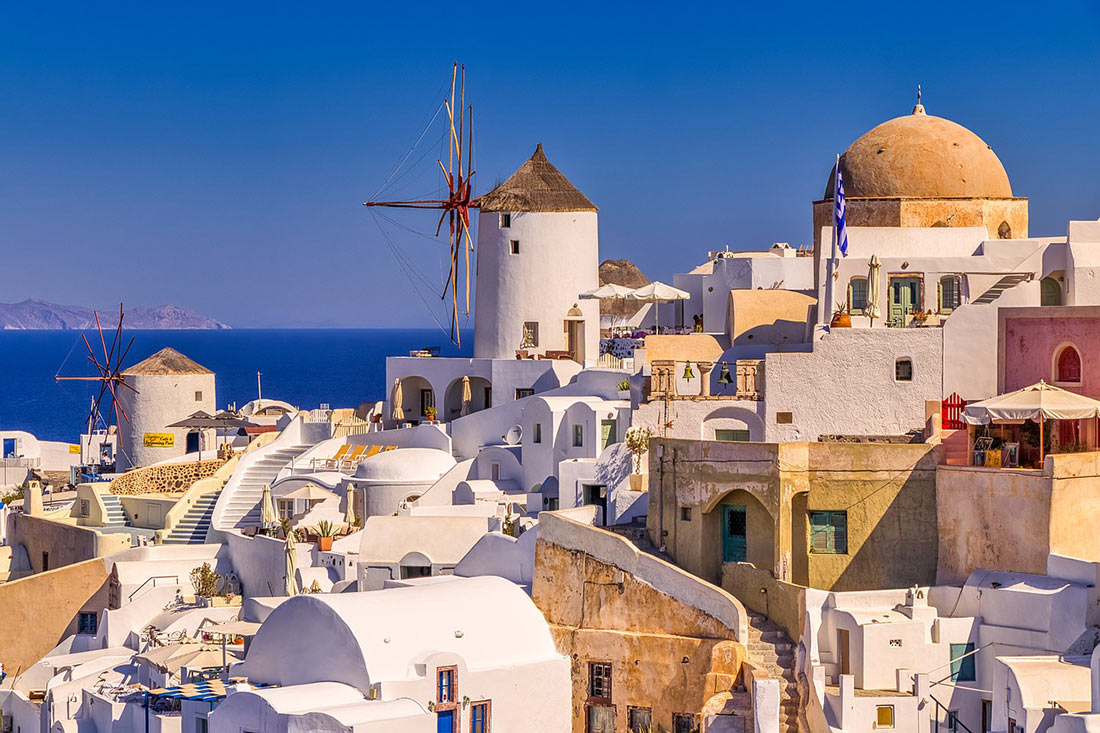 Facebook
Twitter
Pinterest
WhatsApp
ReddIt
Telegram
VK
Viber
Previous articleDevil’s Bridge: It was built a thousand years ago in just one night!
Next articleSacra di San Michele: the silent character of the legendary novel The Name of the Rose